The picturesque city of Edinburgh, capital of Scotland, was founded more than one thousand years ago. From its origins as a hill fort through its Renaissance cultural flourishing and its importance in Scotland's break from the Roman Catholic Church to its modern status as one of the most dynamic cultural cities in Europe, Edinburgh has enjoyed a rich and complex history.

Evidence of habitation in the area reaches back to the Bronze Age. The city is in part named for the hill fort that was erected prior to the 7th century. "Burh" means fort in Old English. The earliest records of a town date to the 11th century, and by the 12th century the city was growing rapidly. In the early 1500s, the wide-ranging interests of King James IV, which included poetry and dentistry, led to a capital with a thriving cultural and intellectual life. The later part of the century, however, was bloody, marked by a civil war over succession that lasted five years. In the 1600s, the city suffered again during the Third English Civil War.

In 1707, Scotland and England were joined, and the Scottish Parliament dissolved. Despite the controversy of the unification, it heralded a new age for Edinburgh, which became the centre of the Scottish Enlightenment, another burgeoning time for both science and the arts. During the Victorian era, Edinburgh remained less industrialized than many UK cities, but its reputation, as a center for the arts, has continued to flourish well into the present century. Politically, calls for independence from the United Kingdom have resulted in the return of a Scottish Parliament in 1999.

The city is set against Scotland's central lowlands in the southeastern part of the country. To its north lies the Firth of Forth, an estuary that leads into the North Sea, and to its southwest range the Pentland Hills. Its climate tends to be mild, which is in part due to its nearness to the sea.

Edinburgh has a population of nearly half a million. Geographically, it is divided into a central Old Town and New Town as well as a largely residential area to the south. Its port, Leith, was merged with the city nearly 100 years ago. In 1995, Edinburgh's Old and New Towns were together named as a World Heritage Site.

The Pentland Hills, although not really considered one of the seven hills of the city, lying on the south side of the town they present us with considerable summits. They consist of over 1500m of lavas and sedimentary strata deposited around 410 million years ago, long before the Arthur’s Seat volcano erupted.
There are endless possibilities for walks in these hills, with the Midlothian Ski Centre at the eastern end of Caerketton overlooking rock cliffs. There can be seen ‘pink’ scree slopes made of blocky debris fallen from the precipitous faces, since the last glaciers retreated from the area about 15000 years ago. Allermuir is by far the most accessible and impressive of the summits available, with a 10 minute journey to either Swanston or Colinton leaving you an hour long walk to the top. Standing at 1,671ft, Allermuir boasts an unrivaled panoramic view of the whole of Edinburgh, allowing the full scale and beauty of the city to be taken in and appreciated.
The Pentland Hills present brilliant opportunities for experienced hikers and leisurely walkers alike. Whether choosing high summits or sparkling reservoirs, challenging hikes or leisurely picnics, the Pentland Hills have something for you.

The Braid Hills are more trachyte and andesite lavas erupted in Lower Devonian times as part of the Pentland Hills Volcanic Formation. They are about 410 million years old and give an enhanced view of Edinburgh and Fife in the Distance. There is a viewpoint indicator on the summit, and a bridle path that  encircles the two picturesque golf courses.
The hotel is at the foot of the hills, meaning the walk takes only 10 minutes, making it an ideal area for a morning walk or after dinner stroll.

Although nothing of it now remains, Braid Castle stood above the Braid Burn from the 12th to the 18th centuries. The first recorded owner of the lands of Braid is a Sir Henry, or Henri, de Brad, or de Brade, who is named as sheriff of Edinburgh in 1165 and 1200. He was probably descended from a Flemish knight named Richard de Brad (or de Breda) who came to Scotland with David I. Henry owned lands from Braid right down into the Pentlands, and Bavelaw Castle seems to have been another of his properties, as in the early 13th century he is recorded as having granted the lands of Bavelaw to Holyrood Abbey.

The lands of Braid were apparently owned by the de Brad family until 1305, after which it’s unclear who the owners were. But by 1485 they were owned by James Fairlie of Braid, and the Fairlie family continued to own them until 1631, when Sir Robert Fairlie sold Braid to Sir William Dick, later styled Sir William Dick of Braid. Following Sir William’s death in 1655, the Exchequer seems to have sold “the lands and barony of Braid, with the manor places, houses, biggings, yards, orchards, barns, byres, stables, dovecots, meadows, muirs, marshes, mill, mill-lands, multures, sucken, sequels and whole pertinents thereof” to a John Brown of Gorgie Mill. Early in the 18th century a new house was built on the Braid estate, and this probably marked the end of Braid Castle. Interestingly on John Adair’s map of Midlothian from around 1682 a large house or castle named Bread is shown on the north bank of the Braid burn, to the west of a walled garden. However on Richard Cooper’s updated 1735 version of Adair’s map, a new property named Hermitage has appeared to the east of the older building. This would appear to confirm the crags above the Hermitage of Braid as the most likely location for Braid Castle. In 1772 the lands of Braid were bought by Charles Gordon of Cluny, and in 1785 he commissioned Robert Burn to build a new house, Hermitage of Braid House. The Braid estate remained in the Gordon family until 1937, when a John McDougal gifted the estate to the City of Edinburgh, buying it from the Cluny trustees. It is now a Local Nature Reserve run by the City of Edinburgh

HISTORY OF BRAID HILLS HOTEL AND THE LOCAL AREA

The Braid Hills Hotel stands on a hill above Pentland Terrace and Comiston Road in Edinburgh and has excellent views over the city.

Built in 1886 the hotel truly is an Edinburgh landmark.

Since then the hotel has been immortalised within the pages of Muriel Spark's ‘The Prime of Miss Jean Brodie’, providing our motto to be the crème de la crème of Morningside.

In that year after the war when Sandy sat with Miss Brodie in the window of the Braid Hills Hotel, and brought her eyes back from the hills to show she was listening, Miss Brodie said: "I renounced Teddy Lloyd. But I decided to enter into a love affair, it was the only cure. My love for Teddy was an obsession, he was the love of my prime. But in the autumn of nineteen-thirty-one I entered an affair with Gordon Lowther, he was a bachelor and it was more becoming. That is the truth and there is no more to say.

Originally built to accommodate golfers visiting a nearby course, the hotel has grown in popularity along with the sport in Edinburgh, now boasting five courses within a one mile radius.

The Hotel was originally a Golf Room erected to serve the golfers playing the new Braid Hills golf course. The Room was fitted with 150 boxes for rent at 7/6d per annum and two stained-glass windows, unveiled in October 1894. Ben Sayers and the Kirkaldy brothers are featured on a stained-glass window in the Braid Hills Hotel, Edinburgh. The artwork was carried out by Messrs Dobbie & Co, 86 Lothian Road, Edinburgh and the windows can still be seen today. 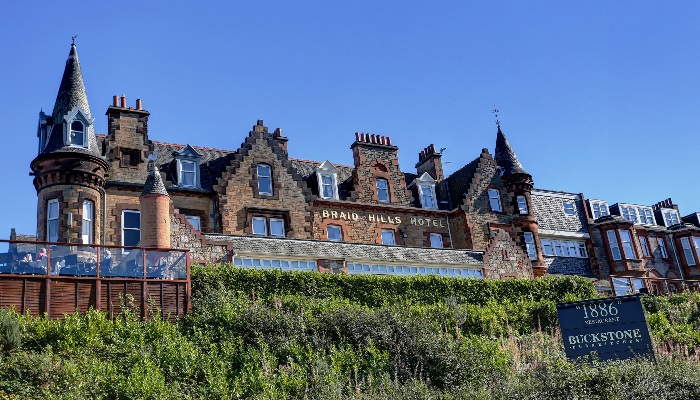 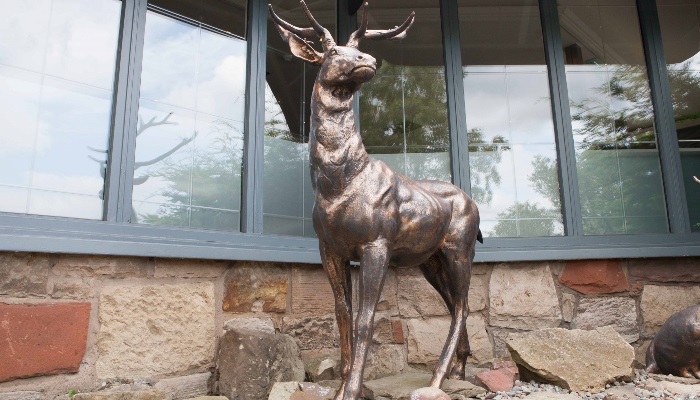